Something new, believe it or not, at the Pyramids: by Bob Fisher 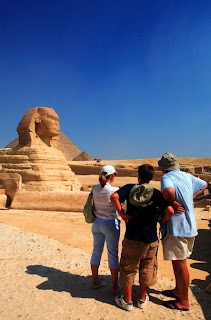 On our last visit, we saw a recent excavation — a very large rectangular but empty pit — behind the Great Pyramid. Here in 1954, the dismantled funerary boat of Khufu had been unearthed. Today the re-assembled boat is displayed in a structure of unobtrusive design. You pay an additional fee to enter and are required to wear soft-cloth “booties” over your shoes in the very carefully climate-controlled building. This funerary boat, which would have borne the Pharaoh across the sky into eternity on the same journey as that of the Sun God Ra, is in miraculous condition.

Memphis, Saqqara (the Step Pyramid), and the Red Pyramid

We especially recommend a visit to these three sites. The ruins of Memphis, the ancient capital of “Lower Egypt” or the “Old Kingdom,” are about 20 kilometres south of Cairo, on the west bank of the Nile. Here you will see the remains of the temple of Ptah and of Apis, as well as impressive statuary, including two of Ramesses II, both about four metres high.

Saqqara is nearby and is the site of the famous Step Pyramid, the model for the Great Pyramid of Khufu, and the oldest standing step pyramid. Saqqara is also the necropolis for Memphis, and dating from the Third Dynasty, the Step Pyramid is the eternal resting place for the Pharaoh Djoser. At this vast ancient burial ground, which is located in a relatively remote part of the desert, you get an extraordinary sense of the eternal, which in many ways is what a visit to “The Pyramids” is all about.

At Saqqara we are also very pleased to see that the site has not (yet) become overdeveloped. There is an extraordinary stillness and acoustical beauty here; you hear and feel the continuous desert breezes as you wander undisturbed throughout the site. What is new this time around is a wonderful small museum of Pharaonic treasures and statues; the latter are especially beautiful because of their distinct “personalities.” At Saqqara you can also admire ancient mastabas (impressive flat-topped, rectangular tombs with sloping sides), which in their simple, eloquent way embody the pure geometrical beauty of these Pharaonic treasures of ancient Egypt.

The Red Pyramid is also worth a visit because, like the Step Pyramid, it will give you a clear idea of why all the great pyramids are not identical, and how each has its own particular style, shape, dimension, and appeal. The Red Pyramid has more of a flattened appearance and evokes a great sense of solidity and the weight of these amazing structures, as well as the immense weight of time, which is manifest in them. At the Red Pyramid, you can also now go inside … be entombed … so to speak. I can assure you, because I did it, that this is a remarkable experience, and not just something to dine out on at home. But be forewarned; this is not an experience for claustrophobes. The passageway that leads into the interior of the Red Pyramid is very narrow, has a very low ceiling, is not well lit, is hard going for most of the way (especially coming back), and has the appropriate airlessness of a tomb. However, you get a very real sense of the massive size and weight of a pyramid — from the inside; and of human frailty. You also get an up close look at how a pyramid was built. After descending into the interior of this pyramid, you eventually come to three chambers, each of which has a stepped ceiling, one almost 13-metres high. You will also stand on a spot in one of the chambers, which lies directly beneath the apex of the Red Pyramid itself. I cannot guarantee any kind of mystical experience, but it is a “moment” that you will not soon forget.

On the way back from the Red Pyramid, be sure to stop by the side of road and admire the equally amazing Bent Pyramid which materializes in the distance against the desert sky.

TRAVEL TIP: To the uninitiated, the hawkers at the major sites can be intimidating. You must run the gauntlet of hawkers because they have been given the lucrative exit corridor through which visitors must pass before exiting the site. On the other hand, why not? Considering how contemporary marketplaces elsewhere on the planet bombard us with much more subtle and subliminal commercial messages, I enjoy this direct approach. And bargaining of course is de rigueur. When bargaining however, remember that this is not a competition to see who “wins”; rather it is a traditional practice through which both buyer and seller reach a reasonable agreement that satisfies both.

Bob Fisher is a Canadian travel writer and Editor of the Philosophical Traveller (http://www.PhilosophicalTraveller.ca), the subtitle of this online travel journalism site is “Taking the long way home.” He is also a columnist for E-magazine, the in-flight magazine of UK-based Eastern Airways.

Siggi Hosenfeld is the Editor of Kenya Travel Ideas. Originally lured to Kenya by Robert Redford – well not personally, but we know “Out of Africa” was a key part of the inspiration, Siggi is continually returning to her second home. On 22 July, Siggi will be raving about the food in the wildlife capital so if you fancy a nosh up in Kenya, catch up with her next Wednesday…

Posted by Acacia Africa Adventure Holidays at 5:44 AM