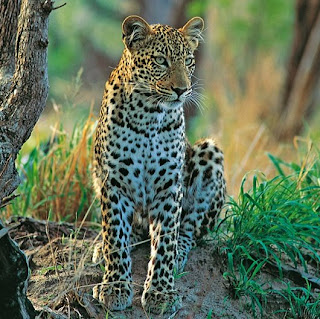 After more than 5 years of going out together, my girlfriend Kristy finally persuaded me that we should try a holiday in Africa. As I'm constantly travelling back and forth to Africa for work we usually holiday elsewhere in the world - but after deep thought (over a beer) and serious negotiation (over 10 beers) we decided to travel there in September/October 2008.

Our safari started in Uganda and would finish in Tanzania via Kenya. Everything was going great guns and she was falling in love with Africa, as I had many years before. A great bonus for me was that we were seeing many things that I had not encountered in my nine years of working for Acacia. These included being surrounded by a troop of chimps in Kabale, watching a baby gorilla suckling from its mother in Bwindi, seeing full grown lions sleeping lazily in the fork of a tree in Queen Elizabeth National Park, swimming with dolphins in Zanzibar and being charged repeatedly by a stumbling baby elephant in the Serengeti. If I have learnt anything from visiting Africa repeatedly over the years, it's that it never fails to surprise you.

However, we were in the Serengeti, the last of eight game parks on our safari and I was a wee bit nervous. Not because were camping out in the wilds that night, but because it was Kristy's last chance to see leopard. The elusive leopard is an animal I love and hate in equal measure. Love, because of it power and elusiveness, hate because of the disappointment I know it can bring when not spotted! It took me several years and game parks before I chanced upon my first leopard at Lake Nakuru, but I kept this to myself and hoped that nature would be kind to us.

On entering the park proper the first big predator we come across was the Lion, the big cat boldly surveying his kingdom on top of a kopjie (rocky outcrop). This was a good start. Shortly afterwards we came across a cheetah, just visible 500 or so metres away. I thought we were on a roll - and low and behold, less than an hour later we spotted Kristy's first leopard in a tree! The leopard had company; a Thompsons Gazelle lay lifeless, hanging daintily from the slim branches of the young Acacia tree that the leopard had appropriated. I honestly do not know which was better, the sight of the leopard with its kill or the look of astonishment on Kristy's face.

We were happy sitting there, absorbing the magnificent spectacle in front of us, letting time drift by, and as other vehicles moved away we got closer and closer to nature's reward. East Africans have a saying, which is quite apt for all of Africa, 'Pole Pole,' translated as 'Slowly Slowly' in Swahili, and our patience was certainly rewarded.

Late October in the Serengeti brings short and sharp showers. As the afternoon wind started to pick up we could sense the leopard beginning to feel agitated, surveying the landscape for predators and a safer, sturdier place to stow its bounty. Then Boom! Thunder belted and heavy rain descended. In a flash the leopard picked the antelope up by the scruff of the neck, hurtled down the tree and dragged its prey towards a nearby kopjie, a 100 or so meters away. The muscles from its neck and shoulders bulged, magnified by the drops of rain swimming down its spotted skin. In another feat of immense strength, the now drenched lifeless carcass was dragged 10 - 15 metres up an Acacia tree, where finally both predator and prey came to rest under its protective canopy.

I glanced at Kristy nonchalantly as if I had seen this all before, but secretly Africa had surprised me once again.

On 28 July Angela Waring will be going back to basics in the recession and opting for an eco-camp in Zambia…join her in the wilds of Africa next Tuesday...

Posted by Acacia Africa Adventure Holidays at 2:05 AM

Great story Heath, reminded me of my trip many moons ago, unfortunately, the Leopard was the one creature I was desperate to see but never did, though I'm sure they were there watching us!
Africa truly is a wonderful place, hope to go back one day, and maybe I'll get as lucky as you both were?
Thanks for sharing,
David from toptravelgear.blogspot.com