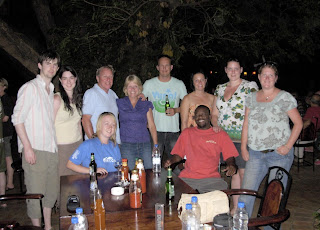 Swathes of cloud fell around the rim of the crater, the early morning mist and high altitude vapours bringing a slight chill to the crisp clean air. Perched on the lip of what is known as “Africa’s Eden,” I gazed down from our camp, foggy patches casting thick shadows over the vast caldera floor.

Africa is a timeless place, and even moreso when it comes to the Ngorongoro Crater – a spectacular bowl that was carved into the earth’s surface over 10,000 years ago by Mother Nature.  Spanning around 265-sqm and reaching up to around 600-metres, its 30,000 strong wildlife population leave their mark on the volcanic landscape year round; the animals drawn to the rich volcanic soil, lush forest and spring source lakes that line the crater floor.

Just outside the ridge we spotted a red-cloaked Maasai warrior, herding his cattle across the highland slopes. A common sighting, the tribe have lived alongside the neighbouring wildlife for centuries – their presence adding to the ultimate appeal of traditional storybook Africa.

The continent is famous for its Big Five, but East Africa has a certain authenticity – its well-known reserves and parks, including the Serengeti and the Maasai Mara, drawing animal lovers here in their hordes.

While you can travel independently and book safaris “as you go,” overlanding is the hassle free way to see more of the region.  Transport can still be haphazard for solo adventurers and in under a month it’s possible to take in around six countries on an organised trip. Every highlight on the itinerary is also perfectly mapped out – R&R balanced with sight seeing, game drives and the more energetic pursuits available in Africa’s adventure capitals.

We started our safari with a dramatic descent – the lush rain forest and thick vegetation, giving way to open grassy plains stretching out across the horizon. Even on an early morning game drive we were kitted out with jumpers, as the temperature in the crater doesn’t start to pick up until at least midday. Either way, it’s advisable to combine a wooly hat with skin protection, as at 9am the rays from the tropical sun are still very powerful.

Eager wildlife enthusiasts we were lucky enough to spot a pride of lions lazing between the sun-bleached blades of grass. Not camera shy, the females and cubs seemed totally oblivious to our presence. Ngorongoro is one of the more well-visited regions due to the phenomenal number of wildlife, including elephant, buffalo, black rhino – and of course, the big cats. Something told me that our subjects were indeed no strangers to safari goers. A couple of energetic cubs rolled around together, while the females fired back a look of pure indifference. It was as if the sight of yet more game viewers had caused their eyes to glaze over. Nevertheless, the short distance between us made it a thrilling encounter.

Our guide’s experience became readily apparent as we drove further into the crater.  Even the slightest flicker in the tall grasses would cause him to venture a guess.  It was as though he could smell the wildlife before they came into view and feel their emotions. During one game drive he called out to the driver, our vehicle stopping near to a herd of water buffalo “I think there’s a lion looking for an early lunch,” he said emphatically, and in the space of a few moments the king of the jungle appeared, edging cautiously through the grassy plains, stalking his next meal ticket.

By far the cheapest way to travel, overlanding is also atmospheric camping all the way. In the Serengeti, there were wildebeest grazing close to our tents and under cover of darkness strange sounds punctuated the silence; the gentle rhythmic calls of the cicacdas followed by a roar somewhere in the distance.

The leopard is still an elusive creature, but Heath Ashcroft and his partner got more than they bargained for on their last trip – proving, undoubtedbly that Africa can still surprise you.  Check out their safari on Tuesday 21 July.

Posted by Acacia Africa Adventure Holidays at 2:49 AM