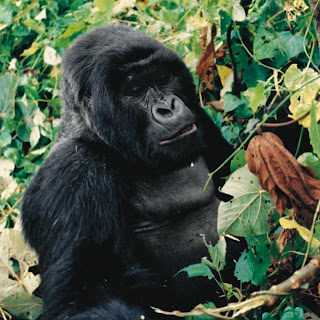 "Andy, the great outdoorsman from the Veldt," here - just checking in - Kind of chilly when I woke this morning – only 15C – brrrr! Anyway we’re on our way into the park now and our guide has been keeping in touch with the trackers who were up and at ‘em way before we got here. They’ve been following the gorillas’ path after locating where they’d slept the night before. We’ve been told not to run if the silverback charges – I think the idea is to crouch down and avert your eyes. Scary thought, but wise words!
I’ve joined up with the Mountain Gorillas to the Mara overlanders and we’ve been trekking through some pretty dense vegetation. The ants can be vicious, but…OK hush, hush guys – we’re finally here and the silverbacks taking a 40 minute breather. Uh oh, he’s clocked us – but it’s only a cursory glance as he reaches up to grab his lunch off the trees – then it’s back for a nap. I guess he’s just making his presence felt.
It’s amazing to be so close to these fascinating creatures they’re literally only 10-feet away from us – saying that the Mubare group are used to these hourly visits so we’re not contemplating a ruckus. Hey wait up, what’s that?!!! No worries only a couple of the gorillas chomping on some leaves close by – phew! Awesome – 30 minutes feels more like 5 – I’ll be back…
My top tip for this week – no flash cameras and make sure you maintain at least a 7-metre distance!
Posted by Acacia Africa Adventure Holidays at 5:49 AM