Hitting The Sands In Namibia - By Zhan Su... 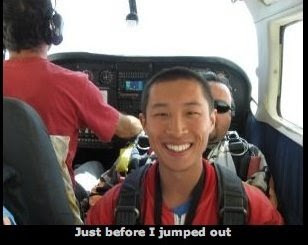 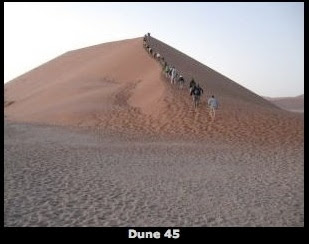 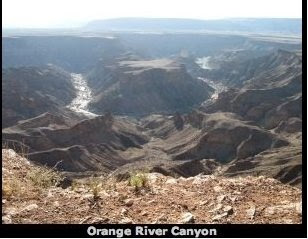 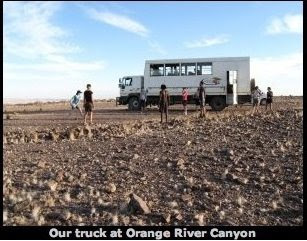 Our Acacia Africa overland tour group met on Friday 17th October 2008 to depart the next day. "Overlanding" is basically a tour for backpackers. We travelled on a truck (NOT a bus!), which has a passenger cabin on the back, slept in tents overnight (apart from the occasional hostel dorm), which we carried in the truck, and we ate the food made by us (apart from the occasional slurp in restaurants). Our group consisted of 21 "tourists", one guide and one driver. Everyone was in their twenties and early thirties, and most appeared to be very well travelled - in fact there seemed to be a lot of "travel junkies" in our group. It was fascinating to hear their travel stories around the camp fire.
Overlanding life is very different compared to the home comforts that I enjoyed in Cape Town, but it was not as hard as I thought it would be. There's plenty of fresh food at meal times, each camp site is well equipped, some even have a pool, and I slept pretty well every night. There's something satisfying about being self-sufficient and surviving on the bare necessities. Even the bush camp, where we camped in the middle of nowhere with no showers or toilets was pretty OK (unless you had to go for a number 2).
In Swakopmund (day 7, Friday 24th), Namibia's premier beach resort, we enjoyed the luxury of hostel beds. To get here we traveled north from Cape Town, through South Africa's lush countryside. My image of Africa had been red dust and barren landscapes (like in Blood Diamond), but this was the opposite: trees, streams and mountains. However, as we got further north, the streams dried out, the vegetation thinned and the mountains disappeared to give way to grassland and eventually, by the time we got to the South Africa/Namibia border on day 2 (Sunday 19th), it was just desert.
On day 3 we passed through Orange River Canyon, the world's second biggest canyon to the Grand Canyon. The scenery was indeed fantastic, but personally having been to the Grand Canyon, that did take a little something away from it.
We then moved on to the Sossusvlei area in the middle of the Namibian desert. On the morning of day 5, we got up in the dark to catch the sunrise on Dune (number) 45. This dune is about 120 meters high in the middle of a group of dunes. At 5:30am, a long thin line of us were making our way to the top. Climbing up the dune turned out to be a slog; I thought I'd be able to run up, but after a minute it was obvious that this was a foolish idea - the sands were just too loose and left me gasping for air. I was grateful for the exercise though (we spent most of our trip sitting in the truck and the hardest thing I’d done so far was put up a tent). Dune 45 has to be one of my favourite places in the world. I love the red sands and the desolate landscape (if you ignore the other tourists) with dune after dune fading into the background, I've never seen anything like it. After Dune 45, we took a desert walk with a very knowledgeable local guide who gave us a tour of the desert and taught us all the survival tricks. Although we all enjoyed the tour I think everyone was glad when it finished at 11am. We were starting to bake under the desert sun (the sands to too hot to walk in bare feet).
The main attraction of Swakopmund appeared to be the extreme sports - so many options were open to us. I decided to throw myself out of a plane, which I was remarkably calm for - it's all 100% safe isn't it? We jumped out at 10,000 feet and the 30 seconds of freefall was the shortest 30 seconds of my life; I only wished it had lasted longer. On one side there was ocean and on the other there was desert; it was just like in Point Break! I also took on the dunes on a sandboard, which while less intense lasted a lot longer. The best thing was that falling over on the sands did not hurt and after this experience I will definitely try snowboarding in the future.
Please note: This review or any related photography must not be published without the sole permission of the author. Please contact Zhan Su
Make a date with the silverback and join Jodie Feltham on our 28-day Game Parks & Gorillas overland tour – next Tuesday 11 August
Posted by Acacia Africa Adventure Holidays at 4:27 AM