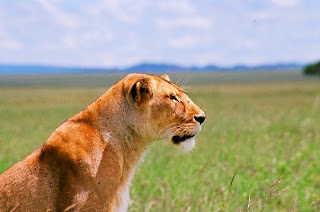 (c) Tom Harvey
Listen up adventurers as our next First Friday Wild Post author is none other than Tom Harvey, a skate, snow and wake boarder who loves art, (street art more specifically), photography, and of course, Africa. Not wanting to disappoint you, but Going Naked in Namibia (& how I came face-to-face with a Rhino) are just some of the upcoming posts to be featured on Tom's blog, The Bloggiest Bloggy Blog. Intrigued? Well, with titles like that who wouldn't be, so if you don't want to miss out, we suggest you get subscribing sharpish... 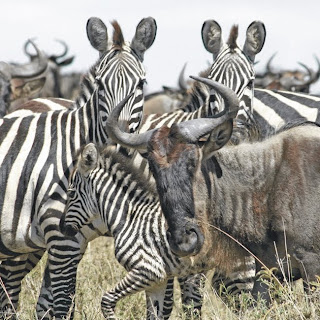 Anyhow, for now it's back to the Zebras! Yes, the Serengeti is packed full of those strikingly black and white striped mammals, but Tom’s overland group was also treated to the sights and songs of “Ebra the Zebra,” a park guide and driver who we think could be the “Subo of the Bush,” - well he’s still very much an undiscovered talent, but I’m sure you’ll agree, arguably more entertaining! Want to hear more? Here's your chance to sample a slightly more off the wall Serengeti...
“I finished college in London with a summer of fun ahead of me. My original plan was to spend it like most other 18 year olds – in the park boozing and playing Frisbee. However, after meeting a traveler on return from his trip to Africa, I soon became obsessed with the idea of an overland trip.
Luckily I had a few savings and a bit of dosh from my inheritance, so after saving a little more (with three jobs!) I was ready to set off on my 43-day Kenya To Cape Town overland trip with Acacia Africa. Including the time before and after my trip, I was on this fascinating continent for around two months, so the following is an extract from just one of my many, many favourite bits….
A few days in and we’d traded our big 20-seat juggernaut for 4X4s to spend a few days under canvas in the Serengeti  - one of the most incredible places I have ever heard of, let alone seen. This massive national park contains millions (literally) of animals, including miles and miles of wildebeest and zebra for as far as the eye (or even binoculars) can see! 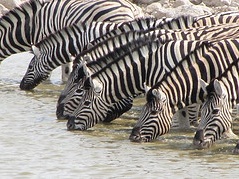 Yet more Zebras (c) Cathy May
Talking of Zebra, the driver of our 4X4 was called Ebra, but he liked to be called “Ebra the Zebra,” and he’d sing a song about himself and his favourite game park animal every time he saw one – which was a lot! He was quite the character and when it started to rain he refused that using the windscreen wipers was not necessary. Moments later even, when a waterfall style monsoon broke out, he continue to insist that they were not needed, and proceeded to drive with his head out the window – singing songs at the Zebra we passed. 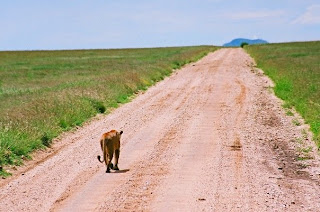 (c) Tom Harvey
Later that day, when the clouds had passed, Ebra the Zebra found us a lone lioness to gawp at. She was magnificent and hungry looking so we stuck around in the hope of seeing a kill (but not a Zebra, obviously).  Although she was not on the hunt, she did walk straight up to our 4X4, even brushing her musclular body against the wheel arch and chilled out in the shade of our vehicle. 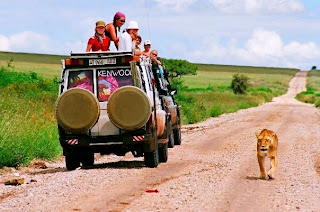 (c) Tom Harvey
I whispered to Ebra, “Should I… err… close my window??” as the hungry looking lioness sniffed in my direction, to which Ebra laughed (loudly enough to make the beast jump) and said “Hakuna matata, you are far too noisy for her to eat.”

This is an extract from just 20 minutes worth of Tom’s 43-day Kenya To Cape Town overland expedition. Want to tune into more trip updates on The Bloggiest Blogy Blog? Subscribe by e-mail or RSS…and yes, we already did!
Posted by Acacia Africa Adventure Holidays at 7:46 AM

Really a wonderful photo. Congrats to the author.

the best ever - LOVE the Serengeti!