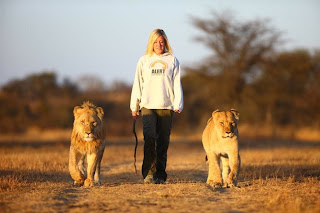 British conservationist, David Youldon, is spearheading a radical project at the Antelope Park, in order to save Africa’s iconic predator, the lion. Estimates indicate that over 200,000 lions may have roamed the continent in 1975, figures declining by 80-90% in less than 30 years. The Park’s “Rehabilitation and Release into the Wild” programme aims to develop the natural hunting instinct of captive lions, ensuring their continuing survival in the wilderness. A cause that has already captured the imagination of 4.8 million UK viewers, ITV’s “Lion Country” is a six part documentary series featuring the reserve, the fourth episode to air on Wednesday 05 May at 19:30 (GMT).
Acacia Africa’s 7-day Rediscover Zimbabwe small group safari (£475pp + local payment from £182pp; weekly departures) incorporates a stay at the Antelope Park and an opportunity to watch the big cats practice their predatory skills on the “night encounter”: a world exclusive in tourism.
Posted by Acacia Africa Adventure Holidays at 8:01 AM

essentialafrica.com said...
This comment has been removed by a blog administrator.
July 12, 2010 at 4:16 AM


Will the final episode ever be shown on ITV ?

The series has finished, but you can catch up with the previous programmes on You Tube and also ITV online.